What are spinning top patches?

Spintop patches were created in regards of the Duncan (and others) yoyo award's patches. 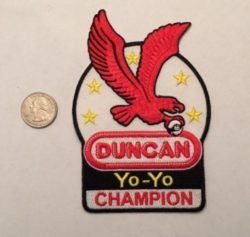 At the time, anyone completing the tricks list in front of official juges (generally taking place alongside the contests) gets the corresponding sewingable patch as a reward.

This process inspired first, Spintastic's founders, then some other players, to create their own patch(es) composed of their favorite tricks.

Some of them are still available as real patches, some other never even existed and are just virtual ones...

Historically, spintastic have been one of the first to share spinning top trick-list, they...

If you want to get the Zenith patch you’ll need to masterize: Double Towers (Torres Gemelas)...

Here is Ta0 patch, with different belts system, obviously the black belt is one of the more...

I have had my trick list together for a while now, but no time to shoot the video. So then I got...

Turegano propose here his own spintop trick patches. The level one patch is composed of: Crazy8...

Here is Adriàn’s patch, it is composed of: Wirewalker followed by half orbits Hammers...

Which isn't really a trick-list patch, but more a group you can be part of by sending a video of you "snapstarting".

The only rule is to start regenerating and playing top, directly from a (hand) throw (without boomerang).

Or watch all video applications!

Here you will find are all videos uploaded by spinners, with their own interpretation, to claim these patches.

You can browse them categorized by patch...